Los Angeles is a major American city located on the West Coast, which is best-known for Hollywood, but also for being the capital of Gangland. It has over 300 gangs in the city, many of them being African-American and Mexican street gangs, but also has a minor Italian Mafia presence, the Falcone crime family.

Los Angeles was settled by the Mexicans in the 1500s, and it became a US city after the conquest of "California", which is the territory as far north as Utah and as far south as Texas, as well as everything west of there. The city maintains the largest Mexican population outside of Mexico, with over 1,091,686 Chicanos (Mexican-Americans) living in Los Angeles in a 2012 estimate. There are also 857,000 African-Americans living in LA County. Many people are impoverished and decide to join gangs there, with over 300 street gangs active across the county, but some others also do it for respect or money.

1992 Los Angeles was perhaps the most violent time as drugs took the scene. The main two opponents in the war were the Ballas gang and the Grove Street Families, two of the most powerful gangs, comparable to the Crips and Bloods worldwide and The Lost and Angels of Death motorcycle clubs. The GSF OG Big Smoke founded his own crack empire in East Los Angeles, betraying the Grove Street Boys after they decided not to join in the drug trade. He helped the Ballas in taking over Los Angeles, but the arrival of Carl Johnson, brother to boss Sweet Johnson following their mother's death in a Ballas drive-by, turned the tide, as he made connections with the Triads and many other factions. In the end, Big Smoke was killed in the Los Angeles Riots that were started by Frank Tenpenny's acquittal of police brutality, and the GSF took back lots of turf. However, the two gangs are still in bloody warfare, with the usual violence continuing. 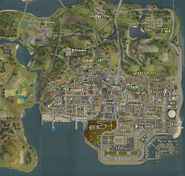 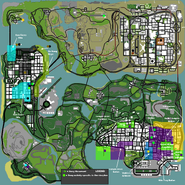