The Vagos (English: Tramp or Slacker), also called Northside Vagos or Los Angeles Vagos, are one of the largest Mexican gangs in the city of Los Angeles, with rumored connections to Mafias. They dealt with cocaine that came in from Mexico, and were considered to be the leading Hispanic gang in the area until their turf in Las Colinas, Los Flores, El Corona, and East Beach was taken over by the Grove Street Families in 1992 gang war. However, they have bounced back and taken over Vepucci Beach, Rancho, Cypress Flats, and some additional turfs around the city. They are enemies with The Families, German Mafia Family, San Francisco Triads (1992), some Ballas sets, formerly the Varrios Los Aztecas (1992), and some factions of The Lost MC (after 2013). They were allies with the Rifa, Topete Cartel, other Ballas sets, Loco Syndicate, and the Russian Mafia, and are currently allied with the Ballas and the Aztecas.

The Northside Vagos were founded in the 1970s in East Los Angeles by Victor Rodriguez, In 1980 their founder and first leader Rodriguez was killed by Some Ballas Henchmen. The Northside Vagos later expanded to Las Colinas, Los Flores, El Corona, and East Beach, and they grew to become the biggest Hispanic gang in the city. The Vagos were Surenos, as they were a southern California gang. Because they were Surenos and Hispanics, this meant that they would be expected to have rivalries with the San Francisco Nortenos gang, the Rifa, and the major African-American gang in Compton, the Grove Street Families. The Vagos were also rivals with the Ballas, and in 1987 they lost control of East L.A. to the Ballas in a gang war. They later decided to stop fighting each other, and they both became involved in the cocaine trade in Los Angeles.

In 1992, the Vagos decided to branch out. They entered a war with the Varrios Los Aztecas gang of Little Mexico under Cesar Vialpando, and they also decided to put aside their differences with the Rifa, making a deal with them at Unity Station. The Vagos took over the Varrios Los Aztecas turf at the same time as the Ballas/GSF dissident (Big Smoke and Ryder Wilson) takeover of Grove Street, and Vialpando had a price put on his head by the Vagos. They took over Mexican crime in the city for a while, but after GSF OG Carl Johnson returned to Los Angeles after destroying the Rifa and Loco Syndicate in San Francisco and robbed the Leone crime family Caligula's Palace casino in Las Vegas, the Vagos were one of his targets. The Vagos leader Big Poppa took over the mansion of rapper Madd Dogg, so CJ helped Madd Dogg in getting his mansion back by killing Big Poppa and many Vagos. He then proceeded to help Cesar and some VLA OGs reclaim El Corona from the Vagos. The VLA took over all of their former turf, and the rival Grove Street Families (GSF) under Carl Johnson took over all of their remaining territories in East Los Angeles and on the eastern shore.

The Vagos were all but eliminated, but around the time of the fall of the Grove Street Families prior to 2013, they were re-emerging as a powerful gang. The Vagos smuggled military hardware, firearms, cocaine, and meth through the Port of Los Angeles, making a good flow of money through that business. The Vagos took over the neighborhood of Rancho, with a set in Venice Beach. They became allies with their former Aztecas enemies and remained enemies with The Families street gang (of which the Grove Street Families was a part). In 2013, their gang leader Nestor Losada was whacked by the Families associate Jacob Mendelhaus, and his successor Jose Garcia was killed by Mark Mendelhaus, his father. Edgar Carlos remained the shot-caller, as many leaders of the gang, their OGs, and the gang members were killed by The Families.

The Vagos gang was weakened by constant warring with the Families, and their drug deals with The Lost MC and Ballas were often crashed on the orders of drug pusher Gerald Ward. The Vagos were obviously weakened by the killings of their gang leaders, but they suffered even worse losses in terms of money when their drug deals were crashed by The Families and their associates. Later in that year, Franklin Clinton and Lamar Davis (Families members working for car dealer Simeon Yetarian) killed at least a dozen Vagos in a shootout in Venice Beach when they were ordered to repo their member Esteban Jimenez's green bike. 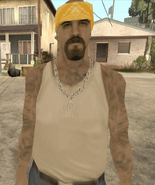 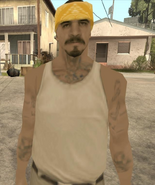 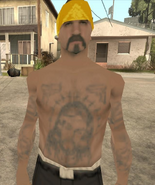 Two Vagos men and one woman